We are proud to announce Jacob Rodriguez as our Strides for Strokes 2016 honoree!!

Jacob suffered a pediatric stroke in the right MCA territory of his brain.

How do I tell Jacob’s story? How do I convey the joy of his birth and later the mourning of what his life could have been? How do I make sense of it? These are some of the many questions I have pondered so many times since Jacob’s diagnosis.

February 2014. I was finally getting to the end of a long birth process when I heard the monitor beeping. I saw the look of confusion on my husband’s face, but I knew what the beeps on the monitor meant. I knew the nurse was paging the doctor; I knew my precious unborn baby was in distress. His heart rate dropped and was not coming back up. Then there was a blur and things seem to be moving in slow motion. I heard “Emergency C-section”—words many pregnant women fear. After it was all finished, Jacob came into the world at 7 lbs, 7 oz., a perfect little bundle of joy. I was told he had a low APGAR, but that he would be fine; since he was full term, he did not have to go to NICU.   He looked and acted like a normal new born baby. His journey would just continue as normal. Such a sense of relief.

I think sometimes when one has a baby, even if it is not the first, one can tend to look past the subtle signs that something may not be just right. Those signs did not become clear until Jacob was about 6 months old. At a routine checkup, the doctor mentioned that Jacob was not meeting his milestones. His growth percentiles were below normal. The doctor asked me why Jacob only had a mitten on his right hand to keep from scratching, and if Jacob used both hands. Of course he does. I think he does. Why wouldn’t he?

As I began to watch this more closely, I realized I was wrong. He did not use his left hand. He kept it in a closed fist most of the time with his thumb tucked tightly inside. His left elbow was slightly bent so that his arm tucked against his chest. Now that I looked closely, his left leg didn’t move the same as the right either. As most moms would do in this day, I searched Google. Google can be a scary place. Words jumped off the screen at me: Cerebral Palsy, Spastic Hemiparesis, Hemiplegia, and Stroke. No! My baby does not have any of these. I will just make sure he uses that hand more and it will be OK. As time went on, it became anything but OK. I realized Jacob’s journey might be changing from normal.

Since Jacob was not meeting his milestones he was referred to physical therapy and then later occupational therapy.   Depending on the results of therapy, Jacob’s pediatrician would determine the next step. Scary at first, therapy over time became an amazing place filled with triumph at the tiniest progress. Therapy was effective, but not sufficient. Jacob was fitted with tiny hand and leg braces and was referred to a neurologist. I made the appointment, but remained somewhat in denial. This still could be fixed.

January 2015. Before Jacob’s first neurologist appointment, I had researched as much as I could and prepared myself for all the possibilities, at least I thought I had. Within 45 minutes, all my fears were validated.

Diagnosis: Left Spastic Hemiparesis, Cerebral Palsy and Microcephaly likely caused by a stroke at or before birth.

I felt like my world was ending, I still held hope that maybe it wasn’t a totally correct diagnosis. As silly as it sounds now, I believed the neurologist could be wrong. Jacob was referred for an MRI to confirm the diagnosis.

Jacob at Strides for Strokes 2015

April 2015. The MRI was scheduled. In April, we took the long trip to Children’s Hospital in Little Rock for a sedated MRI. It is a little disconcerting to have your baby sedated for a test, but there was little choice. Weeks later the scan was in. Jacob’s diagnosis was confirmed. It was not what I wanted to hear. Jacob had suffered a stroke in the right MCA territory of his brain. This means the stroke caused the left side of his body to be partially paralyzed and resulting in Cerebral Palsy and Microcephaly. The journey had taken such a drastic turn.

I entered a mourning period–I mourned for the loss of the healthy child I should have had; I mourned for the pain he would have to endure; I mourned for the fact that his childhood would be filled with doctors, therapy and many braces; I mourned for the school events he would likely miss because of his disability. After some time the joy resurfaced. I am happy because I have a beautiful little boy who has an infectious smile, eyes that sparkle with mischievousness, and happiness about him like many children will never experience. I have a child who has no fear and knows no bounds; I have a child who does not realize he has a disability as he plays with his siblings and as he approaches each day full of energy ready to accomplish something new.

Jacob is now 19 months old and is learning to take steps. Those who know Jacob will tell you that, not only will he walk, he will be running everywhere because he has no fear and the only boundaries in his mind are those placed upon him. They also say that he is so determined that he will do whatever he sets his mind to do. This gives me hope. 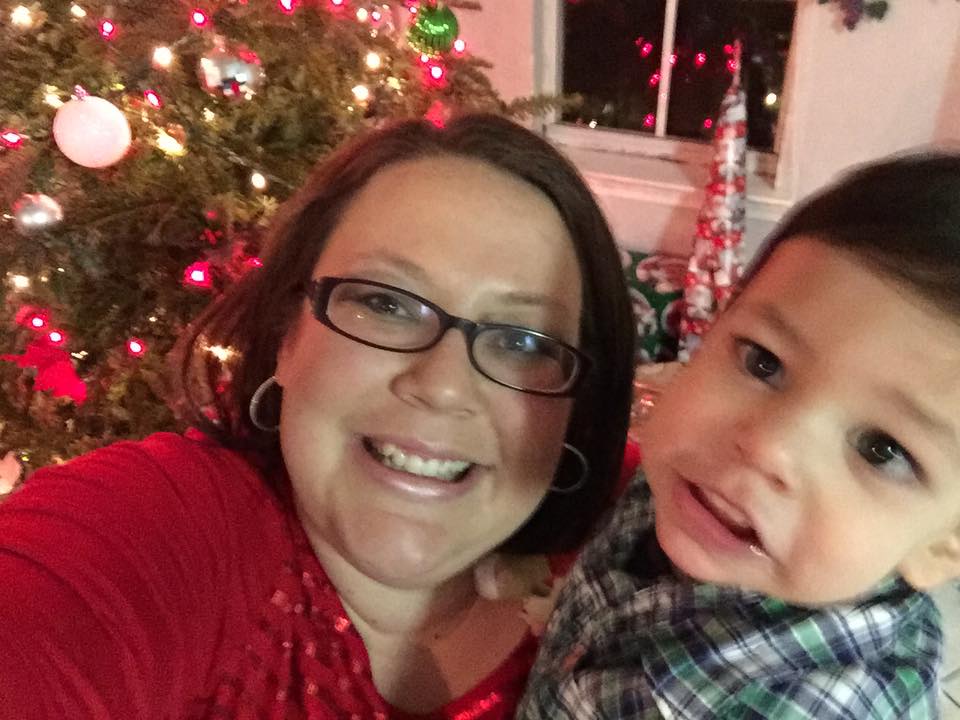 Jacob and his wonderful momma, Kayla, on Christmas Day 2015.

Sadly, there is not much awareness of pediatric stroke. I certainly never knew about it before I experienced it through Jacob nor did I know it happens as much as it does. I certainly did not know all of the possible effects on a child.   It is my hope now that the story of Jacob’s journey will be shared to bring an awareness of pediatric stroke and the possible serious affects it can have on children. Jacob is only one of thousands of survivors. Jacob is so fortunate that he is born into a family and extended family who loves and supports him beyond measure and will strive to help him become the very best that he can be.

I expect that Jacob will have a most interesting journey filled to capacity with goals and trials, twists and turns, overflowing with many rewards as he flashes his infectious smile all the way with a sparkle in his eyes.